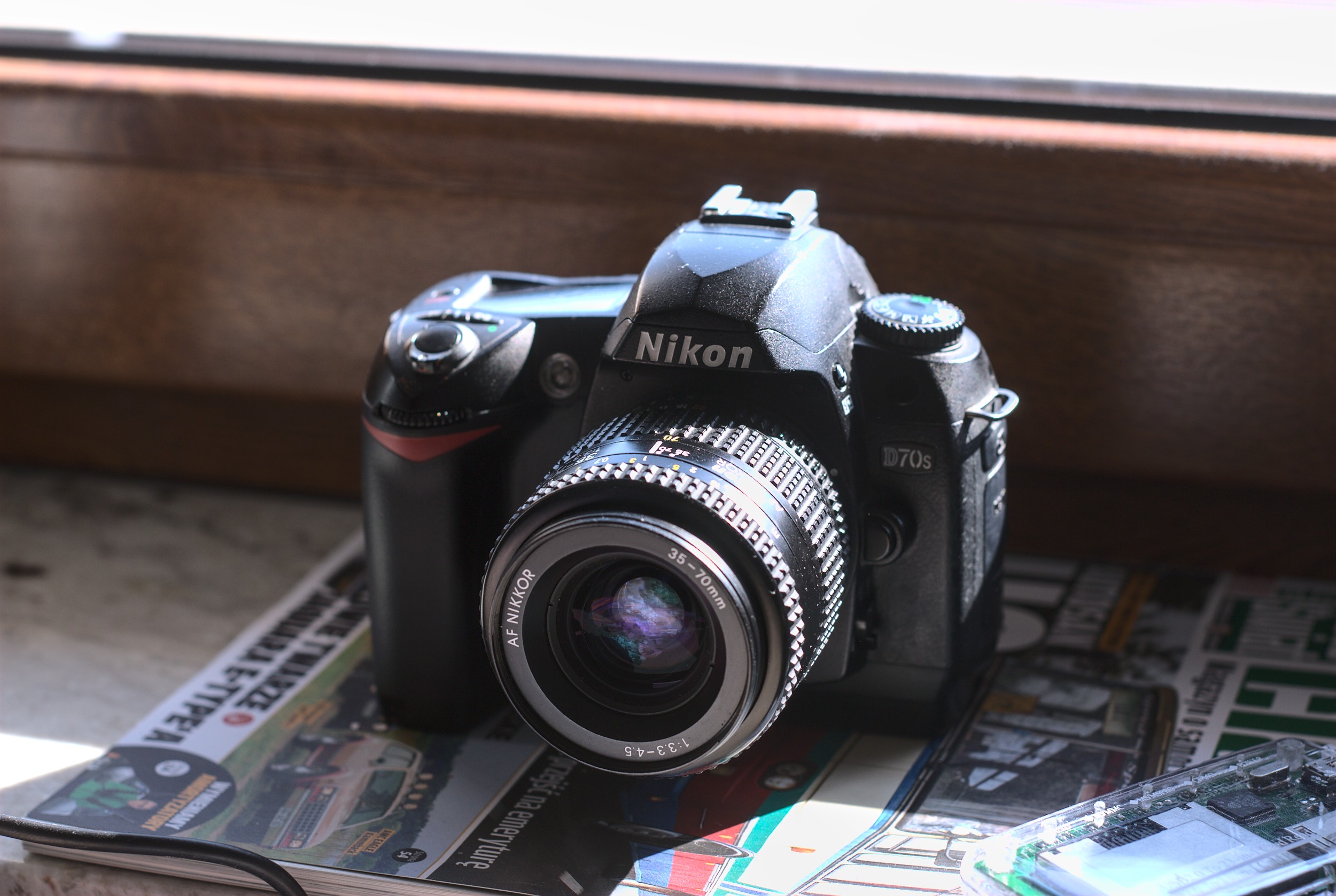 This would be my favorite and the only one digital camera, except one thing. It does not meter light on AI lenses, unfortunately. My copy already shot almost 50 000 pictures. It shows no wear at all, including battery.

I think that being lightweight and having such a great battery (ie. low power consumption) makes this camera almost perfect one. It allows you to print A4 or event bigger with great quality. It has only 6 megapixels, but this does not count at all. It has CCD sensor and great set of filters atop of it. Pictures you take looks like taken with 35mm film. You should get of cource some decent lenses to get that kind of look, but the camera make it a lot easier. I run it with custom picture style which is increased sharpness and increased tone/contrast.

Regarding battery. Sometimes I even forget where I put a charger. On a single cycle you can take up to 1 500 pictures. Even with flash and preview on the screen you can get around 500. That’s a lot. Comparing to other DSLR cameras it is the best measure I found so far.

Although make in Thailand it presents very good build quality. It lacks of falling off rubberized elements, but it has some sticky rubber things, especially on CF card cover. I was forced to scratch this rubber completely because it was so annoying.

It looks like a pro camera put into consumer camera. It has top LCD with runtime parameters. It has plenty of buttons which you can use to set the most important things without going into main screen menu. That is really important in terms of working speed. It has pro style shutter speed of 1/8000 and what is the most important thing it synchronizes flash up to 1/500 of a second. Even now it is a lot. With such a feature, you can easily use flash to shot with filling light, event outdoors. Such a speed increases battery lifespan, because the shortest it is, the smallest amount of power is being used. It has limited AUTO ISO.

One would say that it has certain limitations, such as too few AF points, slow AF with motor in the body. By the way it is also a feature in demand. You can use this body with non-motorized lenses. It lacks AF type button on the body. You need to go inside screen menu to change it. There is no non-CPU lens menu position, so if you put some AI lens, you will get f/0 and 0 mm in picture’s EXIF.

Concerning ISO speeds I have been little confused at the first moment, we start here with ISO 200. Nowadays, people are confident with ISO 100 as a baseline which was not in the past. For long time base film speeds numbers were lot smaller and only in the second half of XX century there was ISO 100 as a let’s call it standard. Actually now it has nothing to do with it as with digital cameras. It is more or less only a signal amplification and I have hears that there were some ideas about keeping this amplification only in the RAW pictures not applying or settings it anywhere. Correct me if I am wrong, but this was SIGMA case. I think that setting ISO number has some other implications but to me it is unrelevant unless you get more color artifacts because of lack of light, which you can call noise. To recap, I am good with ISO 200 as base number, because I can shoot at 1/8000 of a second. You could compare other DSLR manufactures cameras and their base ISO (as well as measured one) but I think that is no use of it. What it is really important is picture quality and overall picture style coming from the camera plus good lens.

If we are concerned about ISO and quality I must say that 400 is still okey, 800 could be better and 1600 use if you have to. Comparing to CMOS sensors such as CANON’s, their perform better in low light, that is a fact. But to me, NIKON’s D70S gives more pleasant picture style. I could call it misterious one with some special kind of black tone and noise granulation. It is a reminescense of 35mm film as I stated ealier.

Here you have some examples of pictures taken with NIKON D70S.

One thing is worth mentioning about the last picture. If you increase ISO up to 1600, reds would be more acceptable than at lower ISO speeds. Increasing ISO makes color more flat and not so vivid. It is a desirable effect as for me.

I am very satisfied with this camera. In case it will break I will get another one, that is for sure. Thery are really cheap, and still you can get one with low shutter count. Feature set is more than enough sometimes. I started even thinking, why do we have cameras with more megapixels in cropped format. They would be more pixel density and manufacturing process will be more complex showing no real world benefits. Why do everyone would like have more megapixels if still you would print no so big formats or crop to put pictures online. I am not quite sure. In terms of low light shooting it seems that people forget that it is only about the light and nothing else matters actually. Raising the bar to shoot with more theoretical resolution and with even less light is a demanding feature, but is it really worth it?

How to import files into darktable